Last month I attended a tech conference in Wisconsin called Madison Ruby. Now before I talk Madison Ruby it's vital to at least acknowledge the nature of my relationship with technology.

I consider myself to have low tech literacy (relative to my age group & global location). I've only been actively computing for 7 years & I've only recently escaped the notion that I am “one of those people” who just breaks tech devices when I come into contact with them. (I'm further alienated from tech than most of my peers, so why not make up a fantastical story about it). My partner is a former tech writer recently self-taught web developer. For the past year he has been constantly challenging the iterations of “I can't” that circle through my brain and stumble out my mouth when I talk about interacting with tech. Often I still think “I'm not smart/good enough to use x piece of technology”.

My partner and I had talked about whether it would be a good idea for me to accompany him on the 7hr drive to Madison and hang out while he was at the conference. But beyond a strong interest to meet some of his colleagues and internet friends (who sounded cool from the internet!) I thought the trip wouldn't be worth it. I'd have to find some place to be and mill about Madison while he attended the conference panels.

Sixteen hours before my partner was going to jump into the car and start driving, wile I was making my now-famous cheddar apple baconscones, one of our friends and an organizer of the conference tweeted : “ have one ticket to @MadisonRuby to giveaway. Tell me why you deserve it and I'll select the most deserving individual!#bribeswelcomed”. I bribed my way in with bacon and baked goods. The conference itself was warm and welcoming. When I saw that one of the first panels was called “Anti-oppression 101” I knew that this would be an okay place for me to be, even as an outsider. I did struggle to keep up with some of the acronyms and terms in both conversations and panels. I decided to allow myself to skip a few panels here and there and repeatedly told myself, “it's okay to not get this and be completely confused”. I took a workshop the day before the conference proper started and learned a few basics about Rails (the framework for Ruby). But really this was all the tech-context I had for Madison Ruby.

There were two main reason I would duck out of a panel & hide behind a book of poems or a freewrite. One was a feeling of being overwhelmed with the unknown. It tooks lots of my energy to follow the threads of certain panels. I like spending my energy in this way, but if something is way outside my context it can be tiring.

The other reason was about jobs and finance. Many topics were presented jovially and lovingly at this conference. Chief among them was an assurance that Ruby programmers will have enough occupational and financial security to “Quit your job” because you know that “all of Chicago is hiring” or that they have skill sets which which are highly valued in our current economy. I am currently and indefinitely being financially supported by my partner. It gave me pangs of jealousy to hear folks speak so easily about earning enough money in the field they chose to consider taking the risk of quitting.

I assume that what was meant by all this sort of talk was to assure folks that they should pursue work they believe is most important (regardless of pay) BECAUSE the field they are working in is stable and generous enough to support such risks. There is something beautiful about this. However, I have no real world access to such occupational stability and sometimes had trouble connecting with these conversations on that basis.

On the final afternoon of the conference (Saturday) I was ducking out of one of the more technical panels. There was an audio hookup from the auditorium into the rotunda studio were I was hanging out. I was half-listening & freewriting about jobs and tech when the raffle (because of course there is always a raffle!) was drawn. Now to win the prize for this raffle you had to be present (the rotunda studio was about 200 ft from the auditorium). One name was chosen. The recipient was not present. Again someone was drawn and they were not present. And then. They called MY NAME.

I bolted up from the table yelling “WAAAAIT” as I ran. I felt my lungs empty in doubletime from the running and the yelling. There was a light emptiness in my chest I'd not felt since grade school. They were just about to choose another name when I bust into the auditorium and ran on stage.

I had won a $250 gift certificate from the most fancy cheese shop I have ever seen! Buying this cheese delayed partner's & my exit time the next day, but the 8.75lbs of luxurious cheese was totally worth it. For a full account of this I have created a cheese tumblr. 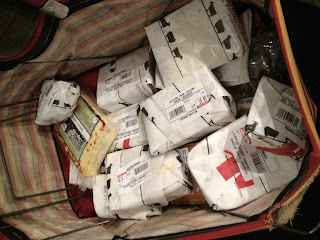 On sunday afternoon (after the cheese spree) as the car whizzed along Hwy 94 & out of Madison's city limits I started crying uncontrollably. Mostly quiet tears with a couple big ol' sobs. Luckily I managed to tell my partner (who was driving) something to the effect of: “I'm feeling sad and I'm just gonna need to be that way for a while, nothing is wrong and I don't need anything, just to be sad.”

I was sad for lots of reason. Not the least of which was fatigue (the conference was wonderful but socially exhausting). Mixed in there were two clearly identifiable tragedies.

One of the things the conference told me, in practice and in words, was my ideas and my story matter. The questions people asked and they way they listened told me this.

Largely due to the awesomeness of my experience at Madison Ruby I finally want to learn to code. I am no longer afraid of picking it up. But not because it represents any great passion for me. Mostly I want to learn tech skills to gain greater access to an dynamic, intelligent, creative community that is doing a ton of work that sounds cool but a little out of my league (for now). I want to be able to participate in more conversations next year at Madison Ruby.

Being invited to participate in this community event was such a privilege. So many of the panels specifically sought to create more inclusive spaces. Often citing that such diversity would be a boon to the coding fields resources (not just a token). I was inspired. And quite frankly, jealous. I know that this conference was definitely showing off the best parts of the coding world but hot damn! I wish communities for beginning writers were half as enthusiastic about encouraging beginners. The camaraderie and colleagueship of this community was so loving and I wish I could have kept some of it. I'd like to bring that into my own work.

Being invited to visit this community was an immense gift. It has given me so much hope. It has also given me a sharper eye toward the massive deficits of colleagueship every other career I have considered suffers from. Madison Ruby and the Ruby community seem special. They're special because they do a whole bunch of fresh and creative culture-making. But they are also special in that our culture currently rewards their work of culture making with financial and professional success.

This year I came in to Madison Ruby a little bit nervous and afraid to approach the experts with “dumb” questions. I was afraid that my small knowledge base about tech would shine through as low status at this conference. I was so afraid of this that I let my partner lead more interactions. None of these fears were founded. Despite my large gaps in understanding I never felt anything but welcomed and supported Madison Ruby. I was occasionally confused by things, and a little ashamed of my confusion, but nobody but myself sought to make me feel shamed or less-than because of how much or little I knew. I didn't need to be as afraid or nervous as I'd prepared myself to be.

I have to come back to Madison Ruby because I want to get over my fear of approaching, my fear of looking stupid. I need to come back to Madison Ruby because the community is insightful. It's asking constantly for relevant feedback. This is exciting it has the potential to even be inspiring. And since I am in constant search of inspiration the Ruby community seems like a place I want to be.
Posted by Wryly Tender at 12:37 PM