Drafty Annotation of O'Hara's Meditations in an Emergency

These poems in Meditation in an Emergency are of a time, location, and context. And by "of a time" I also mean of the moment. Each poem seems an unattached snapshot; a stream of consciouness portrayal of the way reality and thought/feeling permeate one another. This encapsulation gives the poems power and focus but it also requires the reader to strive to join the narrators of these poems in a context that may be forgien to them. For example, I'm a west coast poet without much experience or expertise in the visual art or music disciplines. O'Hara leans heavily on these disciplines as inspiration and illustration. So I had to accept that the peices of mucis or art he referred to were powerful. This gave the poems less of an impact for me and makes me suspect this book was not written with a very wide audience in mind.

That said, there are very interesting lines drawn here between what was then thought of as "high art" and "low art". O'Hara praises the comonplace in the same stanza as the cutlurally prized. He even has an entire poem about the movies, and in another bemoans the slow death of the ballet.

I'm impressed with the variety of forms put forth by O'Hara. It's and interesting sampling of beat influence. Some pieces are one single block of stanza (Chez Jane) while others have a clear cut stanza set up and line distribution (Jane Awake). The form choices make subtle impacts on the reader and  wish I knew more about how he made arrangement choices.

In my opinion he is at his best in the mixed prose/poetry format in the title poem Meditations in and Emergency. There of a beautiful mix here of strange imagery and declaration. It's a deeply quotable piece with bits like "It is more important to affirm the least sincere" and "It is easy to be beautiful; it is difficult to appear so." It's also the only piece here that makes direct reference to O'Hara's homosexuality. I belive it is hinted at in Poem (p.60 ) with the metaphor of foreigness as a possible stand in for the, at the time unspeakable, sex acts traded between men. I wanted to like this poem but the racism of this poem makes it offensive and staunchly sets its voice in a time and perspective that dehumanizes others by using their "exoticism" to the wrier's benefit. This is unfortunate and off-putting since there is such an enticing tenderness and truth to this poem.

I consider For Grace, After a Party a more successful, less offensive, and well-rounded portrayal of an interaction between lovers. One that, minus the name in the title, goes completely without gender signifiers of either the lover or the other characters. The narrator speaks of the strange pleasure and crooked ache of attending a party along with someone you long for. And it kicks in the end like a haiku with reality pushing things back into old patterns. 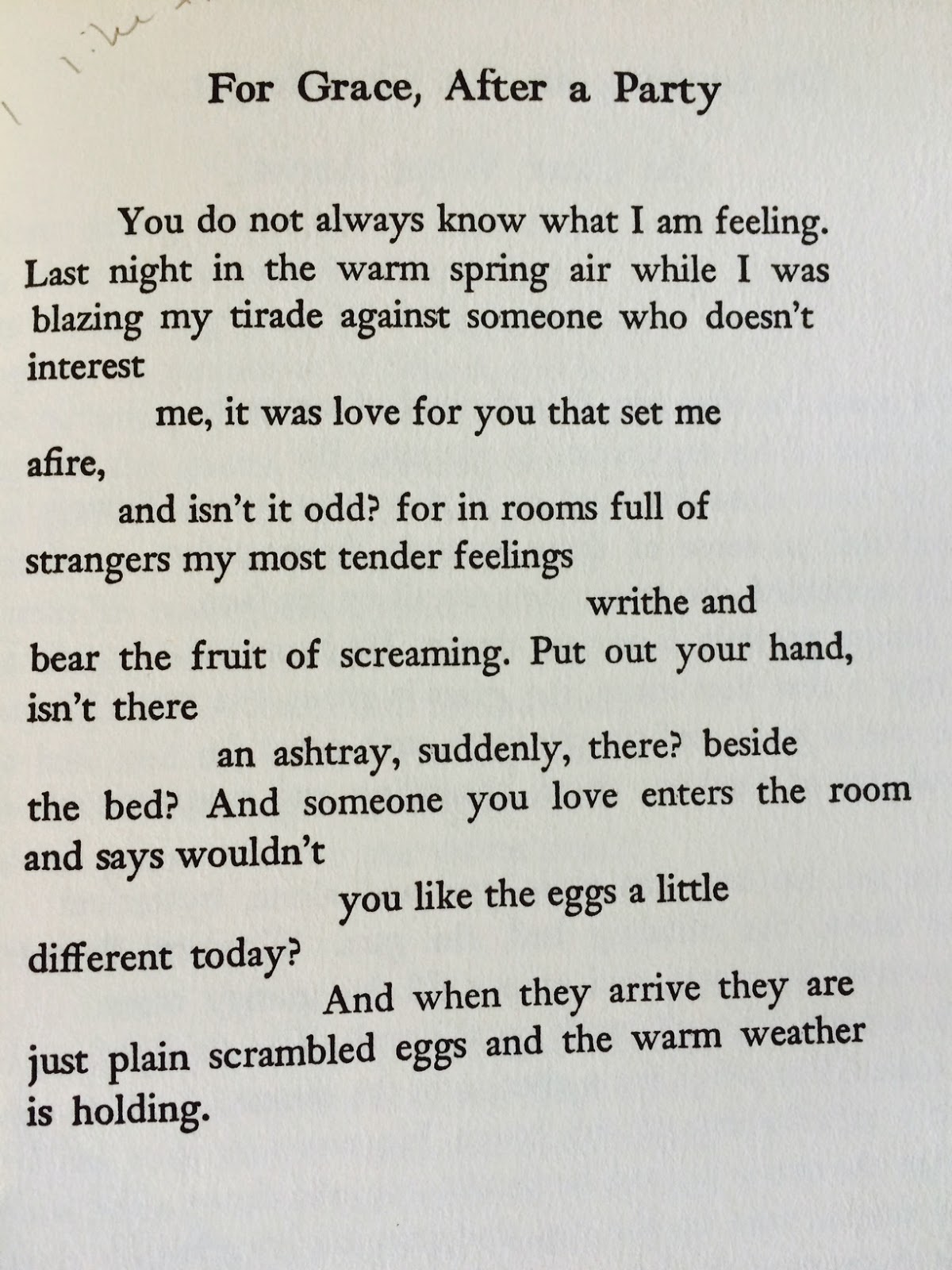 As a reader I often had trouble grasping what the point of each poem was. And while some of the poems (like For Grace, After a Party) benefit form this ambiguity, much of the time I found it frustraitng and confusing. The strange and vivid images were enough to push me through the poems with a lovely hunger, but I rarely felt "full" at the end of them.

I remember taking Blas Falconer's workshop on finishing a poem at Antioch. He used his own "perfectly well written" poem with one very piercing line as an example of an unfinished poem that needed to be fueled from the depth that one line came from. O'Hara has many piercing lines but I don't know if all his poems are "finshed" in this way. This contribute to the snapshot-esque feel of this book and I think also why so many of the details seem to have aged poorly since the book came out in 1957.
Posted by Wryly Tender at 11:43 AM