Hard Rituals. In which I resolve to keep my gender's yellow safety on.

My partner and I moved to Oakland from Seattle in January. And having cycled in both cities I have to say that it often seems like nobody in Oakland wears a helmet when they're riding their bike*. Now I totally see the appeal in that. I see cyclists wearing funky hats and rocking kick ass hairdos. And I kind of envy their freedom. Especially since (when properly trimmed) I like to coax my own hair into a something between a pompadour and a mohawk: 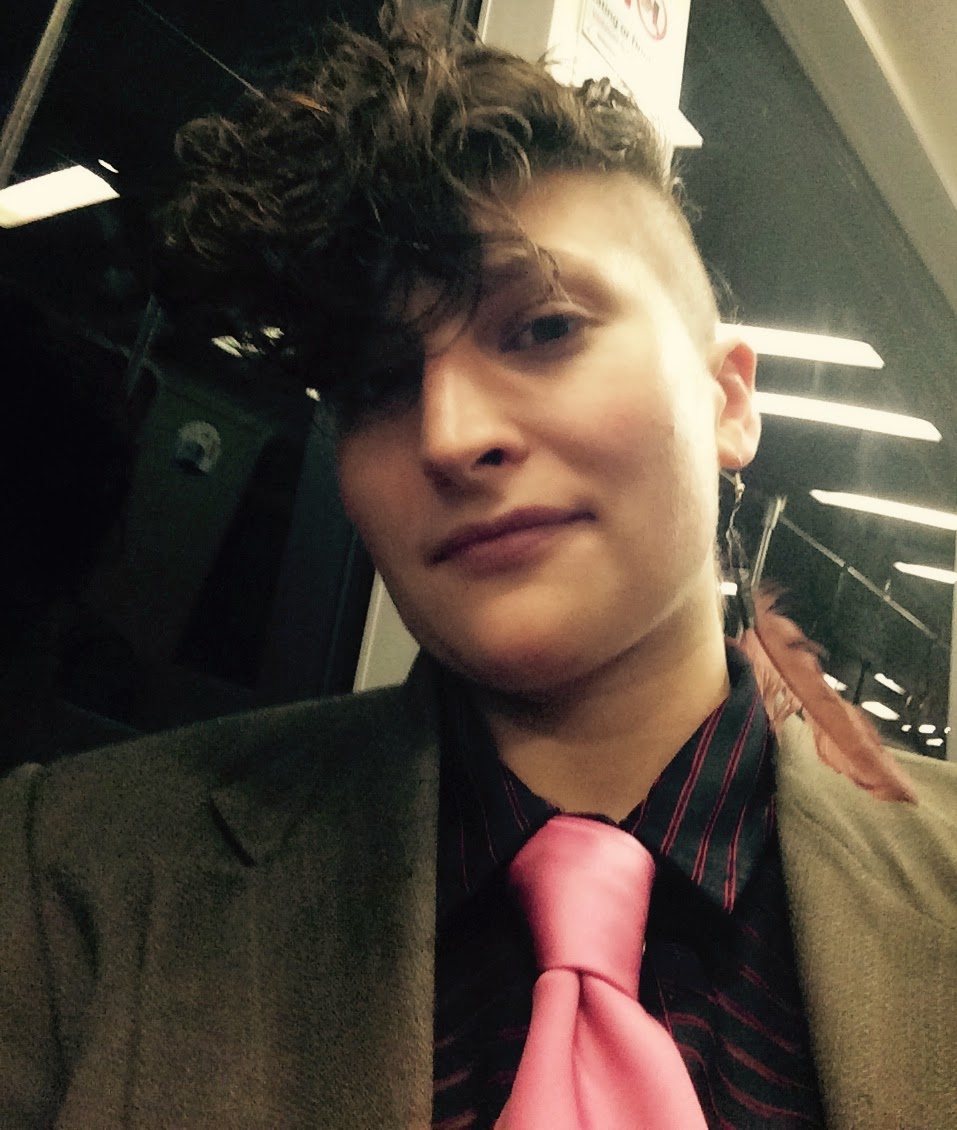 This hairstyle really can't survive being stuffed into a helmet. Despite how awesome it would be to ride around looking fly and feel the wind move through my bouffant, I don't feel safe when riding without my helmet. I'd get the chance to look more like me if I stopped wearing one. But I think I would stop acting like myself if I decided to stop wearing it.

Wearing a helmet is part of my politics and process as a cyclist. It shows that I believe in prevention and preparedness when it comes to taking risks associated with moving through a world made for cars on something that is distinctly not a car. It's bright yellow dome is an advertisement about my concern for my own safety and my awareness of the risk I am taking on. It shows that I know how to take care of me. 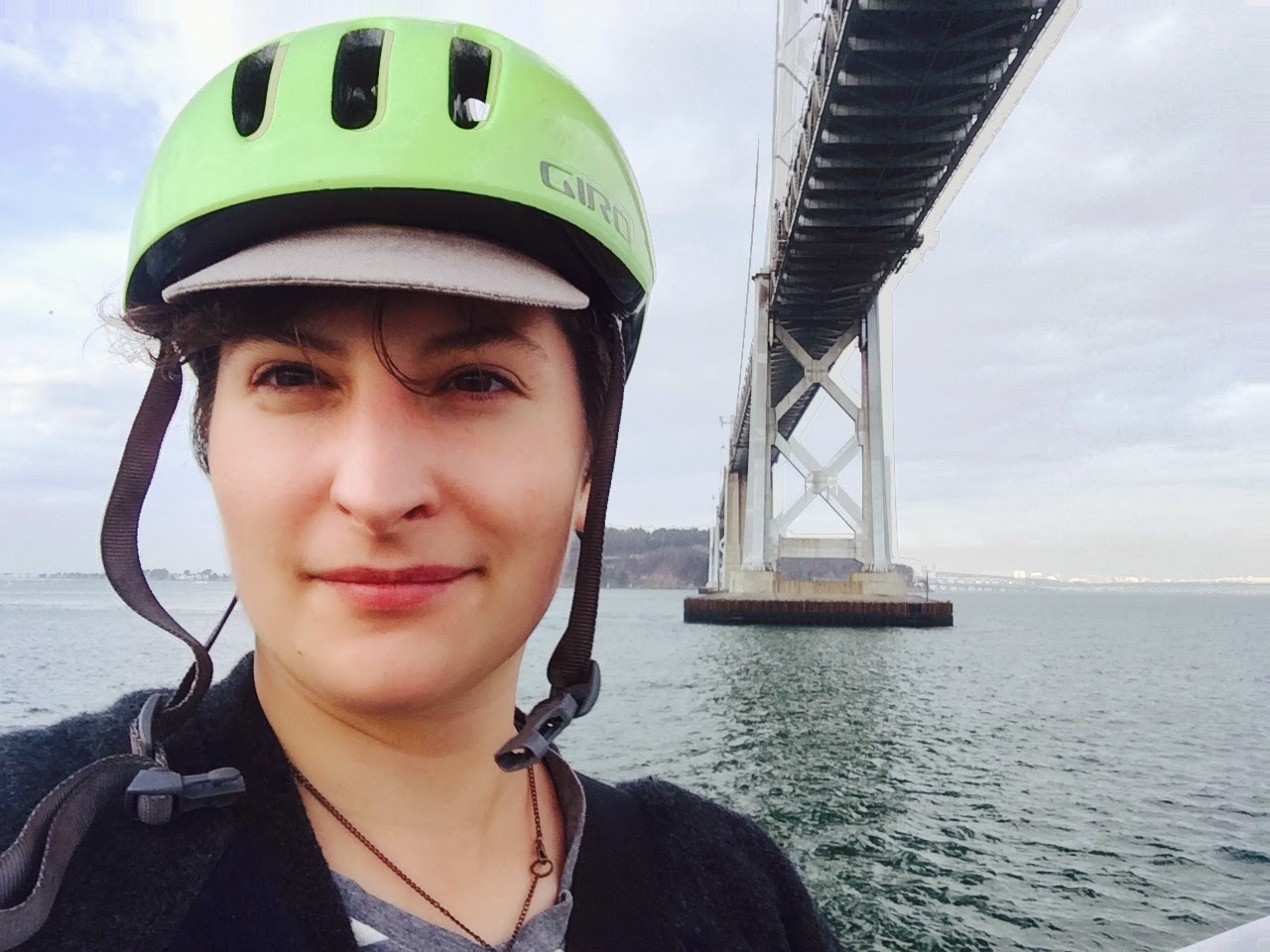 Last night my partner and I had one of our first serious talks about the possibility of me taking testosterone (inspired by our new favorite TV show). When he asked me how I felt I took a long time and gave my answer as an incomplete list of feels (lists help me cope):

Complicated was a segue into everything else. But let's address the fear first. I fear medical procedures of any kind. I fear that my sensitivity to most medications and chemicals would make introducing testosterone into my system a change too enormous for my psyche to handle. I fear I will lose that very sensitivity. It can be a burden sometimes but I cherish it deeply. I fear losing the ability to cry. I fear that taking testosterone will make my masculinity (more) hostile, that it will turn me into a Bad Guy. I fear losing my ease of empathy. (this list goes on and on)

But the changes T would likely evoke in me are also attractive in many ways. I'd like a higher muscle to fat ratio. I want to be able to grow (more and darker) facial hair. I want to not have to hide curves to get the look I want when wearing mens clothes. It'd be a relief not to feel I have to "put on" any clothes or behaviors to be seen for who I am.

This is where the frustration, conflict, and eventually shame come into play. Granted I think I'd look good with many of the characteristics T would bring out. But I also feel angry and disappointed in myself for being attracted to/seduced by that. Because I like the way my body looks now. And I see the masculine in it. So do many of the people close to me. I love my body for the way it is now. I don't want to give it up. It kind of feels like I'd be abandoning a part of myself I am comfortable with, just to satisfy what I feel are the false standards of masculinity.** My demanding others see the masculinity in my big breasted, wide-hipped, and sweet-faced casing subverts these standards. It challenges convention by requiring those who associate with me to rethink what they learned about gender and body.

The ugly and common underside of this is that my demands are often rebuffed. People (even those I love and who love me) will refuse to recognize me by willfully ignoring my pronoun preference. And when I try to explain myself or my gender I'm sometimes blamed for the confusion and subsequent discomfort of others. If all that sounds tiring that's because it is. It's a lot of work.

But for now the set of demands my identity requires is an honor and a privileged I'm willing to pay for. Making these demands is a ritual I give my energy to every day.*** Just like the practice of securing the straps of my helmet under my chin, it's tiresome and restrictive. It keeps me from appearing to others in exactly the way I'd like, but for the most part the security it grants me, and the hard message it sends, are currently necessary to my being.

*In California the law only requires that those under 18 wear a helmet. While there isn't a state law regarding helmets in Washington state, King County law requires all riders to wear one.

** This is absolutely my personal perspective on my own transition process and is in no way fit to apply to or reflect the transition or rationale of other trans people.

*** I'm no martyr. I know that I may not be able to "pay" this price of my energy forever and that a transition into a gender role society will readily accept may be in my future. I just want to fight while I feel I can.
Posted by Wryly Tender at 8:49 PM